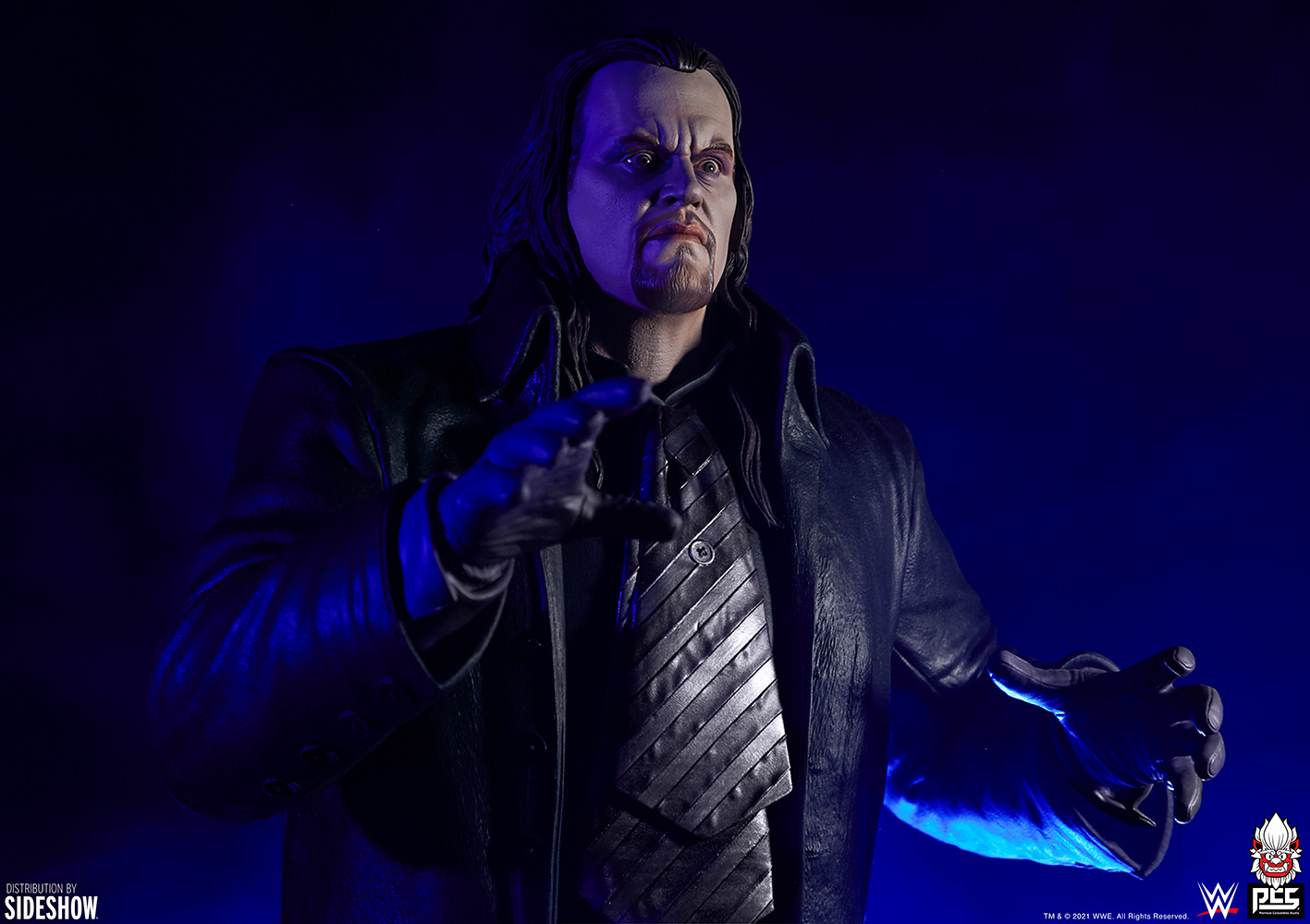 The Undertaker Figure by PCS

If you are a fan of The Undertaker in search of a realistic, detailed replica statue, you will want to check out The Undertaker Figure by PCS, new from Sideshow. With a price tag in excess of $600 as of the time of this writing, this figure of Mark William Calaway does not come cheap. Is it worth it? In this guide, we will take an in-depth look at this statue now available for pre-order.

Before we dive in with exploring The Undertaker Figure by PCS, we want to briefly introduce Sideshow in case you are new to it.

Basically, if you are in search of a premium collectible action figure or statue, this is the place to shop.

Sideshow offers incredibly detailed figures and replicas. While most of their products are characters from film and TV, they also have a small selection of WWE figures.

Sideshow actually offers two Undertaker statues at this time: The Undertaker and The Undertaker: Summer Slam ’94. You will see that they are both pretty similar. Let’s check out each of them in turn.

PCS stands for “Premium Collectibles Studio.” PCS is the studio that designed The Undertaker figures we are looking at. Along with The Undertaker, they also have designed detailed figures of Stone Cold Steve Austin, Ultimate Warrior, Ric Flair, and The Rock.

The level of time and work that goes into each PCS creation is phenomenal. The studio writes, “Every PCS piece you bring into your home represents thousands of hours of planning and craftsmanship from our expert team of dedicated artisans.”

We should clarify that as a statue, The Undertaker is not posable, and has no points of articulation. So, it is not technically a WWE Undertaker action figure. If you are looking for Undertaker toys, this also is not the right item for you, as it was not designed to be played with, simply admired.

And you will certainly admire it! This is a statue that commands respect. The classic black duster features a texture that appears remarkably similar to actual cloth, and includes individual buttons and realistic creases. The metallic sheen of the grey and silver striped tie matches the band on his black hat as well as his gray gloves and boot covers. From every angle, he is the essence of intimidation.

As for his face, there are two portraits included. The first features the hat. Strands of hair dangle in front of his face. You can only see the whites of his eyes, as they are rolled back in his iconic manner. If you want to see his face more clearly, the second portrait allows for that. The hat has been removed, his hair is no longer in his face, and this time, his vicious stare is fully exposed (eyes not rolled back). As with the clothing, the hair and face are remarkably detailed and accurate.

Now, let’s check out the second figure, The Undertaker: Summer Slam ’94. As a fan of The Undertaker, you cannot forget the time he took seven months off after Yokozuna beat him in January 1994, sealing him in his own casket.

While he was gone, the “Underfaker” showed up—who was actually Brian Lee, his cousin. During the Summer Slam main event that year, the real Undertaker made his return, facing off against the Underfaker.

In that match, The Deadman showed up wearing an outfit very similar to his original, but with some differences in colors. The gray elements of that outfit were replaced by purple for a striking new look.

So, ultimately, choosing between the two statues is just a matter of deciding which colors you prefer, and which period of The Undertaker’s carer you want to capture.

Where Can You Buy The Undertaker Figure by PCS?

Are you ready to bring The Undertaker or The Undertaker: Summer Slam ’94 to your home collection? To pre-order your realistic, detailed collectible statue of your favorite wrestler now, click the links below.