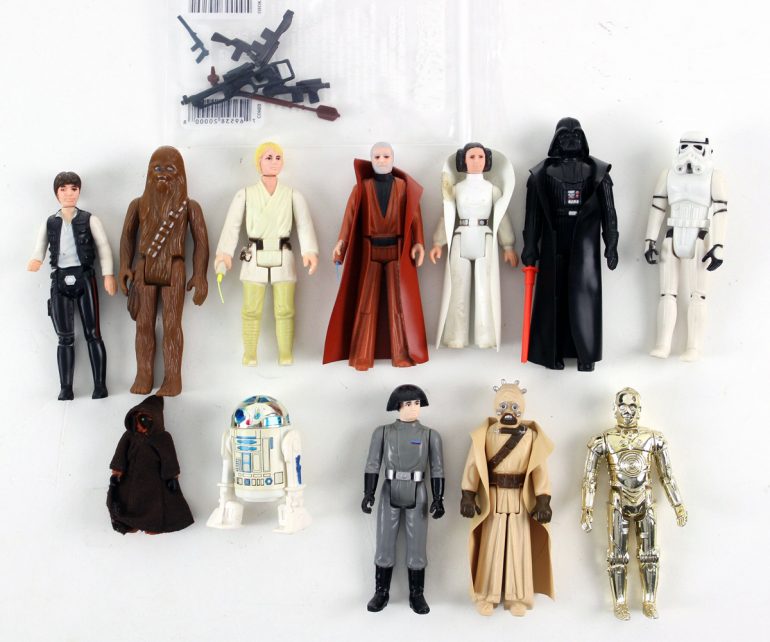 If you love Star Wars and everything to do with it, you might be interested in collecting movie theater Star Wars memorabilia, rare Star Wars figures, and other collectibles.

But if you are new to collecting Star Wars paraphernalia, you probably have a lot of questions. What are some of the rarest and most expensive items you can purchase? What types of collectibles are on the market? In fact, let’s dive in by answering that first question.

There is a huge variety of Star Wars collectible merchandise out there.

Those are just a few examples. As you explore the vast world of Star Wars collectibles, you will find many more.

What is the Most Expensive Star Wars Toy?

Being as new items are appearing and disappearing from the collectibles market every day, there is no way to provide a definitive answer to this question.

But we can take a look at what is currently on the market and has been in the past to see if we can find some examples of some of the more expensive Star Wars toys you can buy.

Otherwise, you probably will draw a blank when you see the Glasslite figure which was released in Brazil but never made it to the US.

If you can find Vlix in mint condition with the card still intact, it can command quite a hefty price.

Indeed, it has been listed for as much as $58,888.80, which may make it the most expensive Star Wars toy ever.

It may not come as a huge surprise that collectible figures of Boba Fett can sell for quite a pretty penny. Among them, the rarest and most expensive is the Boba Fett J-Slot Rocket-Firing Prototype.

The public got its first look at the Boba Fett J-Slot Rocket-Firing Prototype at the New York Toy Fair in 1979. It included a backpack with a rocket which you could fire by manipulating a switch on the back with your finger.

Alas, only 25 of the rocket-firing Boba Feet figures were made by Kenner. But the company became concerned that it might be a choking hazard, so they determined that the firing missile was a bad idea.

They went on to release the toy, but not in the rocket-firing form which appeared at the toy fair.

Once in a blue moon, someone puts one of them up for sale. Just how much do they sell for? At this link, you can take a look at the listing for a Boba Fett J-Slot Rocket-Firing Prototype.

Incredible, right? You could buy a nice house for that type of money.

After the Boba Fett figure went up for sale which didn’t include a firing rocket, it came with a Star Wars card.

So, if you can find a version of this figure which comes with the Star Wars card, that is a rare and valuable find.

A few more of the most expensive Star Wars toys you can collect also were produced by Kenner. They are versions of Luke, Darth Vader, and Obi-Wan which all come with double-telescoping lightsabers.

What exactly is a double-telescoping lightsaber?

It was a clever design, and is still quite cool to see, but the small parts were fragile, and not really all that viable from a practical standpoint since they couldn’t stand up to much in the way of wear and tear.

For that reason, the production run of each figure was brief. Of the three, you are most likely to encounter Luke, and least likely to find Obi-Wan.

Another valuable Kenner figure to pursue is the Jawa toy which came with a vinyl cape. As the last Kenner Star Wars toy for 1978, the Jawa has become legendary—but the vinyl cape version was not the one which went into full production.

The issue with the vinyl cape version was that it was quite small. Kenner wasn’t confident that the small toy would be appealing to buyers. So a new, larger version of the Jawa was made, this one with a cloth cape.

The smaller Jawa with the vinyl cape is very hard to come by, and can sell for as much as $10,000.

Just make sure if you are thinking about collecting this toy that you actually are getting the real thing. Sometimes, con artists will simply sell the regular version of the Jawa, but will trade out the cloth cape for one they made themselves using vinyl, typically from the Obi-Wan Kenobi figure which also had a vinyl cape.

How can you tell the two apart? Well, first of all, look to see a scale photo of the item you are considering. Remember, the cloth cape version is larger than the vinyl cape version.

We have talked about some rare and expensive Star Wars toys, but that doesn’t cover all vintage Star Wars items out there. Here are some other collectibles that may entice you.

This 30” x 40” movie poster was printed for display in theatres.

Reprints and reproductions of this poster are not so hard to come by and not all that expensive. But the original can fetch quite a bit. As of the time of this writing, we see one listed for $11,995.

This banner measures 26” x 104”, and was made for display in movie theatres when the original Star Wars came out. Finding one in mint or near mint condition is rare, so it can command a price as high as $14,995, which is what we are seeing as of the time of this writing at an Ebay listing.

This is a Star Wars Episode 1 themed pinball machine. It was released in 1999 and features Pinball 2000 hardware. This memorable game included light saber battles with Darth Maul and multiball mechanics. As of the time of this writing, we are seeing one of these going for $4,495 on Ebay.

What is the Rarest Star Wars Collectible?

Wondering what the all-time rarest Star Wars collectible is?

We would guess that it probably is the Boba Fett J-Slot Rocket-Firing Prototype which we shared. Again, there were a mere 25 of them ever manufactured.

We have talked at length now about rare and expensive Star Wars vintage collectibles. But that doesn’t account for all Star Wars collectibles out there. There is also the category of art collectibles, many of which are modern items.

The most renowned company in this niche is Sideshow Collectibles. This company creates stunning figures, statues, models and more associated with Star Wars and other popular franchises.

The level of craftsmanship that goes into Sideshow Collectibles figures is rivalled only by the level of authenticity. The studio writes, “Because we have the same passion for quality and authenticity as our collectors, we’ve forged collaborative relationships with Hollywood filmmakers and special effect houses including Guillermo del Toro, Legacy Effects, Spectral Motion, Amalgamated Dynamics Inc. and KNB EFX.”

Let’s take a look at some of the Star Wars collectibles you can purchase from Sideshow Collectibles.

Bring the imposing presence of Darth Vader to your collection with this impressive life-size figure. Standing more than 7 feet tall, Darth Vader’s costume is a stunning replica of his attire from the films. You will be amazed at the level of detail in the chest plate, belt, lightsaber and helmet. This is a statue, so it is not posable.

As of the time of this writing, you can buy this statue of Darth Vader directly from Sideshow for $8,900.

Jabba the Hutt was proud to collect and display Han Solo in carbonite. Now you can add the same piece to your collection! This life-size figure from Sideshow Collectibles replicates the prop from the film in precise detail using fibreglass. The figure also includes light effects built into the side panels, base and rear power canisters which mimics those in the film.

Another popular category of collectibles from Sideshow Collectibles is the company’s Sixth Scale series. These figures are the perfect choice if you want something which is as lifelike as the life-size figures, but doesn’t take up as much space. Each one is built to exactly 1/6th scale.

Not only that, but the Star Wars life-size figures which Sideshow makes are usually statues which you cannot pose. But the Sixth Scale figures are generally articulated.

That gives you flexibility in how you pose them for display in your collection.

Plus, they cost a lot less than the life-size figures, putting them in the budget range of more collectors. Let’s check out a couple of impressive examples.

As of the time of this writing, this is the most popular Sixth Scale Star Wars figure from Sideshow Collectibles, and is manufactured by Hot Toys. This version of Luke Skywalker captures his likeness during the Battle of Hoth in The Empire Strikes Back, and was created in celebration of the movie’s 40th anniversary.

Elaborate detail has gone into recreating Luke’s face, hair, Snowspeeder outfit, and accessories. These include his life support unit, flight helmet, grappling gun, thermal detonator, blaster, lightsaber and interchangeable lightsaber blade. The lightsaber includes an LED, so it actually glows. The interchangeable blade shows what it looks like when in action.

Even the packaging for this product is top-shelf; it features a cool, retro design for maximum nostalgia, and even includes a diorama which places Luke in the snowy landscape of Hoth. The figure stands 11.02” tall, has more than 30 points of articulation, and costs $265.

At the time I am writing this, Luke Skywalker™ (Snowspeeder Pilot) is only available for pre-order, but is still the bestselling Sixth Scale Star Wars figure from Sideshow Collectibles!

Also from Hot Toys, this Sixth Scale figure brings the Mandalorian from the live action TV show with the same name to your collection.

This figure features the Mandalorian’s outfit and helmet complete with weathering. Accessories include a blaster rifle, blaster pistol, a flag, a Stormtrooper helmet, and spears. The base for the figure captures a desert environment, making it easy to visualize the world from the TV series.

The Mandalorian Sixth Scale figure stands 11.81” high and features more than 30 points of articulation for amazing posability for your collection. You can buy it for $243.

Along with the life-size and Sixth Scale figures, Sideshow Collectibles has a wide range of other collectible Star Wars merchandise you can consider.

Now you know a bit about some of the rarest and most expensive Star Wars collectibles out there.

Some of these figures are so rare that you are lucky to spot them on the market, and will be making a substantial investment by adding one to your collection.

Thankfully, not all Star Wars collectibles fall into this category. There are many more modestly-priced items out there which are more accessible to the average collector.

Some of these are vintage items, but others are beautiful modern replicas from companies like Sideshow Collectibles.

So, keep exploring our site to learn more about Star Wars collectibles, or follow the links in this and other articles on our site to purchase life-size Star Wars replicas and more now.